Sylvie Shining brings in her life trajectory, multiple spiritual experiences of different traditions, enriched by the encounters of women and men of knowledge. It all starts from her biological family, his father, “spiritual seeker” practitioner of oriental philosophies, disciple of Gurdieff. Still in her childhood, she lives with her grandmother, healer and herbalist who teach her the world of medicinal plants. At the age of 9 years old, she received the first vision of Master Saint Germain, who showed her life mission: “the art of healing in the evolutionary process of the human being, through the awakening of consciousness”
During her childhood, she did absored knowledge of various traditions, such as those of the Catholic, Orthodox Church, Islam and Judaism. At the age of 16 years old, she studied at the Arcane school in Geneva, spiritual training founded by Alice A. Bailey. A precious teaching, which is part of her journey until today. In search of a broader understanding of mystical experiences,

Sylvie travels to the East, at the age of 20 years old, she do participate in retreats, notably with Khrisnamurti and she approach the teachings of Sri Aurobindo. Subsequently, she discovers the path of Dzogchen of the Tibetan Buddhist tradition, through Chögyal Namkai Norbu Rimpoche. After a journey of several years in the Orient, experiencing remarkable encounters with Masters, Sylvie crosses the Atlantic and discovers a strangely familiar world in the Wisdom of the Andes with Curandeiras and women Medicine. With the intention of continuing her quest for knowledge and information, she travels to the United States, Mexic 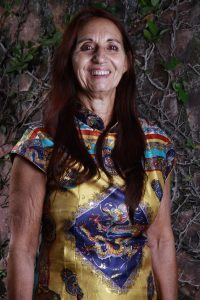 The 2nd stage of her spiritual training life begins at this time.

Unexpected meeting with Dona Antonia who transmits her the art of the medicinal herbs, natural treatments and assisted delivery. Consequently by this period, a fortuitous and admirable encounter with Donna Talking Leaves, who teaches her, intense initiations processes, such as Wheel of Healing (Spirit Retrieval), Chanupah (Sacred Pipe), Inipi (Sacred Native American Sweet Lodge), Cristal Healing (Cristal therapy ), Rites of Passage for teenagers and elders and the Vision Quest.

At the same time, another exceptional encounter with Rose Sweet Water, a Native American woman who transmits her the teachings of the Council of Elders of the 13 Moons, Ancient Wisdom Legacy for the evolution of the women.

During one of her many trips to Mexico, she was initiated by Doña Juanita and Esteban to the Temazcal (Sacred Mexican Sauna).

At the age of 38 years old, after many years of studies, practices and encounters, Sylvie decides to share her knowledge offering her existence in the service of the teachings of the “Council of the Elders of the Twisted Hair People”, Millenary Wisdom of the First Traditions, sustained and perpetuated by men and women of knowledge from all over the Planet.

Today, Sylvie is an Elder and her teachings are the synthesis of these powerful encounters and life experiences, between knowledge of the Orient through the Masters men and the Wisdom of the West through the Masters women, true inner wedding between the Yin and Yang, the union of the Deep Feminine with the Deep Masculine.Currently, Sylvie is an instructor of the Council of the Elders of the Twisted Hair People, she channels and transmits her teachings connected to the Original Source. 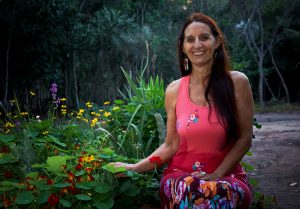 Sylvie is Dance Chief of the Eagle Dance in Brasil and France. Powerful transcultural ceremony of transformation and healing with the intention of creating a new Planetary consciousness.

Sylvie has disciples in different parts of the world. Consequently, in order to have teachings adapted to the contemporary world, in a more updated, transparent, understandable and dynamic way, she founded the Sweet Eagle Tribe Medicine’s association. An autonomous school where all those who seek knowledge, initiations, rituals, practices, ceremonies and personal healing are welcome, uniting philosophies and traditions in a proposal of self-realization through the awakening of consciousness.

Sweet Eagle Tribe Medecine doesn’t belong to any ethnicity, dogma or religion and does not resell any institutional rights.

Sylvie lives in Brazil in the Chapada Diamantina, state of Bahia/ Brasil. She founded the association Castelar da Alvorada, Space of Creative Consciousness.