Since 75.000 years ago, the great dreamers of the ancient tradition Sshwanesie  manifest themselves by the crystals’ kingdom in Grandmother Earth with the intent of divine purpose. They constructed crystal dunes underneath the oceans to dance awake the dream of human habitation in our planet. 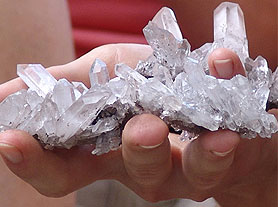 Crystal Mandala’s origin is from the Pleiades giving away crystal skulls to the Cherokee ethnicity.

Crystals in its geologic formations are characterized by an energy field (piezoelectric) that is known to sustain the connection between Light spheres and the memories of Earth. They are conscious beings that channel, beam, store and potentiates high vibration frequencies.

Crystals used for Mandalas are called shifter. They have many qualities: they act directly in the mind registers accelerating the healing process, they remove unbalances and sickness in all levels (physical, mental, emotional and spiritual), they regenerate and fortify the energy field, they relieve pains, tension and they also reduce stress.

This workshop is open to every holistic therapist, witchdoctor, healer, Light worker and all who have the interest in learning Crystal Therapy.

The knowledge will be transmitted in 2 modules – one theoretical and one practical.

*Sacred Sweat Lodge is also used as a precipitation method for the memory and for consciousness expansion in order to reach deeper levels of understanding from the teachings. It enables an understanding that transcends the cognitive visual perception.